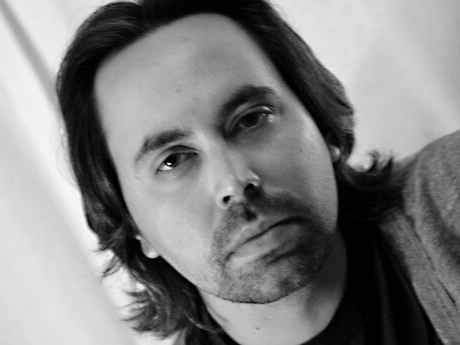 Freedom reaches its notion in thought.
It leaves a bite mark on its ID photo[rope tugs] [torso]

I live at once over it.
Satellite poker tourneys,
soju martinis,
and a flumpet chamois
amble by,

For the unsearch-termed
child with bolt action,
you were in the truckle

In clover, you flopped
a feedbag phoenix
while I made oars with raised
lashes, unlimited calling
autographed by the rain
as surely the battlements
undergo cyst drainage
was how the movie ended,

In a gorge of whiplash
pigeons effect a great forgetting zone.

You were right before your original thought.


From Virgil and The Mountain Cat (University of California Press, 2009). Reprinted with the permission of the author. All rights reserved.

Discretized Vortices of the Superfluity

One poetic line I frequently think on comes from Ernesto Cardenal's book-length poem Cántico Cósmico (Cosmic Canticle): "Wall Street Journal, Neanderthal." This musical phrase from Cardenal's modern epic is discordantly inventive, precisely didactic, and ruthlessly critical. To participate in it is to suffer dispassion and to reattach the shattered relations between human beings and things. At its most suggestive it evokes surpassing capitalism as a kind of new speciation for the hominid line. Written in the 1980s when Cardenal was a cabinet minister for Nicaragua's Sandinista government, his line represents some part of our distance or estrangement (to use an old fashioned term) from the material reproduction of our lives: food, consumer goods, and energy are increasingly the earth's work for others in disparate places connected by the built infrastructure of our globalized world. Cardenal's faraway-near was the US-sponsored anti-left war campaign in Central America throughout the 20th century. I think his line is a forceful encapsulation of what I hope poems can do: find language as vital and as incomplete as history. And when I think of Wall Street in Cardenal's terms today, I'm reminded of the lines of an earlier Latin American modernist, César Vallejo (here translated by Eshleman and Barcia): "What an incredible amount of money that it takes to be poor."

How did this world find me? I grew up in a Chicano-Chinese and Anglo household in Long Beach, California, always driving, sometimes surfing, and passionately playing orchestral music in the age of Snoop and Dre. It was all music to me. Early influences included modernist jazz, Pound, Beckett, Williams, and Ginsberg; later I came to John Ashbery, Barbara Guest, Michael Palmer, and W.B. Yeats. I lived and wrote for a time in the poetry communities of UCLA and the University of Iowa before coming to Santa Cruz, California, in 2004. I live 75 miles to the south of the great Bay Area poetry community. Those poets who hazard their poems don't give me solace but something even more rare these days in the contemporary poetry world—hope.

Writing this now, I think my poetry occupies a nexus of interactions between my documentary filmmaking, my editing and reviewing for Lana Turner, and my discussions and actions with a groupuscule of left-wing friends in Santa Cruz, Los Angeles, and the greater Bay Area. Lately, when I'm writing poetry or looking through poetry submissions to Lana Turner, I'm hoping to find poetry with some bite and to write and read what swerves away from my most patient analysis. I'm also hunting for "political" work that refuses to yield to the ossified conceptions of politics proliferating throughout the decline of the neoliberalism; I want poetry of genuine oppositional antagonism, beyond the supposed left-politicization of parataxis. The force field of allusion need be maximal in this poetry: a harmony of the low and high, of social inequality and natural abundance. I'm working on a new line, a song to sing like Paul Celan's song beyond mankind—a song to return Celan's beyond to us, remembering the necessity of political struggle and experimental poetry.