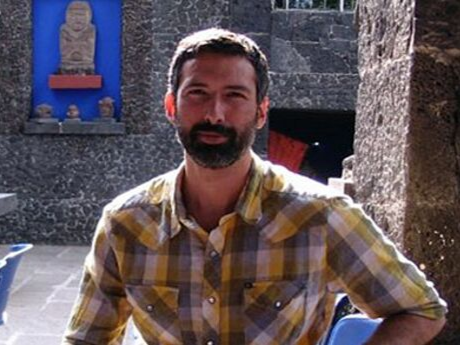 
Why shouldn't I take your pills
you've got the hospice Percocet all day
but it feels bad now to play fast and loose–
normally that lane in Kabul would be thick
with schoolgirls
but the Taliban came through
and you've got lumps
in your neck.
I'd like to go piss outside
to affirm life but Dallas is
everywhere a street with cars
always coming by.
President Karzai is not afraid, BBC says
I don't know why not–
there's opium growing over there
and the field surgeons are working hard.

El Paso in 98 degrees below
I'm coming to see you
I worry
the pilot is drunk, will
push us into the sand
because magic is sympathetic
and I watched a show about
plane crashes last night.
A girl calls out the things
she sees from the plane window
makes it all
as normal as the 300
Mexicans lynched
each year
down there between 1910 and 1920
I think before
ladies with smokes
had come a
long way
at all
–those times
the beginning
of cute
haircuts.

Now it's Phoenix
down there
and the guys behind me
are talking golf
and paradise
and buddies.
I'm obsessed
with marking my age
and my times–
I tell you it was like this:
I never cared for Kurt Cobain
shoe gazer
rich asshole
and I'm still not
a good friend
to suicide cases
Jesus, you don't see
Phoenix
killing itself
even
with the weight
of all its misting
tubes. I don't know
I guess there's
as much tenderness
in this plane
as bloodlust.
The big walrus of a man
tosses pretzels
to his little boy.
I keep telling Susan
we should adopt.
I want an eight-year-old
a cute one
maybe black Irish
with freckles under
shiny black hair
and green eyes
learning to track us
across the room.
It'd be great
to put our arms around
a part-grown orphan
and save ourselves
all that time.

Home again
I hang up the phone.
You keep throwing up.
I read a line
to the dog
who listens
then turns to mauling
his favorite pillow
piling stuffing, big polyester balls
around the room.

I wanted to make friends cry
maybe that's what Scott said
about his reading
but he didn't write anything new
and neither did I.
I should pull the pillow away and give the dog his rubber bone.
When it's good I see
all the parts of the poem
levitate at once
into a constellation
but these days I just
want a maid
and someone to mix
the strings in the background.

I kiss the dog
and smell spit
over hair
warm with blood and cells
in commerce.
So what's special
about people
then? I tried
one of your

morphine pills
and just cramped
and slept.
It was the opposite
of hip-hop
the windows
down speeding
up Central Expressway
and knowing
I just
got a retirement
account. Either
way I think
it's death people
bring but I
don't know how
tonight.
I know I can
say striped paint
I know there is
Plains grass
opening and rejoining itself
in the wind,
desert Mohave stones
various dirts do glint.

Tell me about the furniture
in your parents' house–
none of it was yellow
and there was only
one dog named friend.
Young ladies don't wear fur
at the table, in other words
sit up and the mountain
never blew and soldiers
never walked the streets
but there was the convent
and that put a little quiet
into the trees.

I'll tell you
the neighbors here in Dallas have four
crepe myrtles in their yard
and their canopies have grown together
into one shade, oh
it doesn't matter what
a crepe myrtle
is, but their bark is smooth.
You never met my dog but his
tendons are very long
and I bet they wouldn't tire
if we had to walk all day
up the
Goodnight
Loving Trail
to its source
–Wyoming.

Tell me where you're from
and I'll place you in the parking lot
my brothers and I will dress
in grasses and the steady passing
of the cars will go dim and
we will be a wall of grass you face.
Let's say you were from Hollywood
the furniture in your kitchen was yellow
so we said Hollywood without end
until it meant nothing and your home
was in our voice.
Your father was a stern man
there was a dog named friend
cars don't stop.

From This Isa Nice Neighborhood with the permission of the Author. All rights reserved.

Introduction to the work of Farid Matuk
Geoffrey G. O'Brien

Farid Matuk's This Isa Nice Neighborhood takes its idiosyncratically compounded title from a never-executed public art commission in San Francisco; the project would have arched that phrase in neon at the former site of a Filipino community and glowed parts of it simultaneously in Spanish and Chinese towards the Mission District and Chinatown. It's a canny choice for a poetry that seeks to occupy every available subject-position in relation to an event. Early in the book we encounter two consecutive poems titled "Talk" (there are many repeated titles across the collection) that describe the same melancholy self-interested exchange in Sicily between a North African teenager and a group of Italians, the first poem beginning "I am Moroccan today" and the second "I am Sicilian today." Like the simultaneously glowing phrases projected at neighborhoods, Matuk's I and today wander through perceiving centers and their inflections by class, race, and country, and don't do so to isolate some corporate human essence, but to track the interactions of different persons and the tragic and gratifying outcomes of those encounters, the "History As a War of Poses" as another early poem has it. That wandering through minds multiply foreign to each other has its counterpart in Matuk's extraordinary comfort with moving from subject to unobviously related subject as he moves between lines and stanzas. It's a poetry that softens the difference between non sequitur and entailment:

and witness the glint together, and wonder
and be so joined as he felt himself to be

with the wife slightly standing
and the reporter barely there.

And yet, there is nothing of this by the sea

This empathic imagination that, beside the rolling sameness and difference of the waves, conjures the execution of a thief and his mourning wife half a world away, is typical of Matuk. He will not sacrifice the glory of the incessant ocean, the mutation's of sunset's internal differences, nor any affectionate, jaunty declarations of love for his partner Susan and their dog, but he will not pretend those avowals and their objects don't happen in a world that has also permitted countless lynchings and fatal border-crossings and hate speech—all those waves too are part of an ongoing singable tally. The book ends with a series of "Tallying Song[s]," a phrase borrowed from Whitman's "When Lilacs Last in the Door-Yard Bloom'd," and like Whitman, that earlier poet of ecstatic and solemn inventories of difference, Matuk seeks to "accommodate the earth" in all its social and phenomenal variety, opportunity, and damage. It's why a poem about Richard Pryor and race relations can end "Birds in song / spit gold ropes"—the poet's gaze can make "thin relation" of anything because "everything / happens beneath the cover /of something else, something prettier / now there are Arab African boys everywhere" and even the words "is" and "a" can unite to form a new neighborhood.

Kobena Mercer reckoned critically with his desire for black men some time after taking to task Robert Mapplethorpe's photographs of black male bodies, bodies Mercer saw as kin. He came to acknowledge a partial identity with Mapplethorpe's gaze, noting that "[i]n contrast to the claims of academic deconstruction, the moment of undecidability is rarely experienced as a purely textual event; rather it is the point where politics and the contestation of power are felt at their most intense."[i] It's a revision of Keats's negative capability from "when a man is capable of being in uncertainties" to "being uncertainties," a shift from incongruous ideas to incongruous subjectivity. So we are doubled and estranged even while we are made available to shared histories. No news here for poets, but I like Mercer's articulation because it reminds me that the terrain of awareness, of subjectivity, is politicized and open to resistance. Rather than try to literalize the indeterminacy of language, I take Mercer's suggestion that language is being historicized and coded by its communities of reception, occurring in tandem with context, with audience, and so with rhetoric. The possibility of play in this process hooks me into poetry.

Dale Smith and Jeffrey Walker talk about a "transpersonal lyric" that allows for such variance and play. They situate the lyric in ancient Greek rhetoric to suggest lyric poetry "makes arguments" and runs counter to romantic-modern notions that perceive the lyric as a "state of feeling" or unified subjectivity.[ii] They emphasize ceremonial staging, with its attendant dynamic between an unstable speaker and audience, and so edge the lyric toward performance. Or maybe more precisely, they locate lyric's potential to stage arguments in the chasm between poem and reader. I want the poem to be an argument that advances through a protean range of illocutionary gestures and ellipses, activating assumptions and responses for readers that exceed anything the poem or poet could anticipate.

My teacher, the late Lindon Barrett claimed, "the market depends foremost on simplifying and exploiting virtually all orders of the imagination."[iii] Many contemporaries I admire, Susan Briante and Rosa Alcalá, to name only two, train the formidable intelligence of their poems on the imperative of frantic capital exchange that marks our moment. While I want the poem to be an argument, at the same time I try to respond to Barrett by making with the lyric a space where the vagrant imagination can range. In this I've found help in poets' journals as much as in poems, the notebooks of Hopkins, the travel journals of Tu Fu, Schuyler's diaries, but also in poems that seem committed to composition by receptive attention rather than willful intention, the work of Joanne Kyger and Philip Whalen, for example. What I am trying to say, so as to approach a ground floor of my poetics here, is that part of what I want to know in a poem is how the poet got over, from one precarious moment of being in the world to the next, and how the poem can help open spaces for the imagination that are fugitive but resistant, and maybe free.