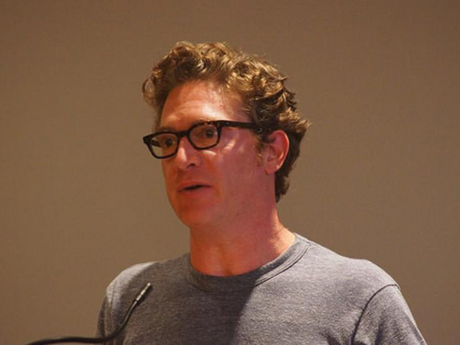 Absence of the Archbishop

You meet at most four archbishops
in a lifetime. You have at most
one lifetime. You sing when in pain
and expect to be heard. You see the outline
of holy figures, their windows and blinds.
You want to kiss the gold of the coat and
you want it to come off on your lips.
You think of singing gold songs and are not
for a moment in pain. You see the sun not
as it is but as it will be without you,
cold gold with all the windows closed.
You expect to be heard singing in your house.


From The Guns and Flags Project (University of California, 2002). All rights reserved. Reprinted with the permission of the author.

"For more than 40 years I've been speaking prose without knowing it."
—Molière, Le Bourgeois Gentilhomme

We use the mathematical notation Thomas Hariot proposed in the 17th century without experiencing ourselves as working within a tradition, though we are. We say "hello" without experiencing ourselves as citing the history of greeting, though we are. While < and > symbols don't capture sense data and mental states very well, they are without question expressive and ruled, as is "hello." Poetry's greetings and equal signs are slightly vaguer than logical notation, appear different from different subjective angles or centers, and change over time. These facts make such functions and signs (their history of use) no less susceptible to study. Why do most MFA programs emphasize the voice-driven workshop [sic] while mostly ignoring disciplines such as rhetoric and prosody from which the significant sounds of poetry derive? The history of poetry is that of a vast and disagreeable coterie with no people in it, only usages, expressive and ruled. Yet precisely because of these disagreements about it, many poets don't feel obligated to acquire traditional knowledge, practicing poetry's large language without a sense of its historical lack of consensus. So what? Do the latest flowers need to be self-conscious about their ground or learn floral code? Yes, and yes and no. In poetry, deploying rhythms is inescapable; a reliance on rhetorical figures, from the simplicity of chiasmus to the knottiness of gradatio, is built-in. These are functions so intimately related to all other genres of speaking that everyone's both an expert and a natural; if you scan material from a recent genre such as rap (especially that of a graybeard like Rakim) you'll find at worst balladic measures and rhetorical competence and often much more: "you're gettin' me / so upset that I'm wet / cuz you're sweatin' me." But this is not intuition at work. These effects surely appear because of a DIY technical mastery, a relentlessly inherited, practiced, and challenged common language. If such practices pass into everyday speech over time with happy results, ballads to boasts, if praxis is the afterlife of prior theories, if all one has to do is upset the present, then why run after a departing sense of the past? To be happier.

What knowledge does to its subject or object, what techne does to the practice of poetry, these are trivial questions—poetry is that techne, techne is that subject. When Rakim asks the non-trivial question "How can I move the crowd?" he's accessing the origin of rhetoric (property disputes), its inventio, but as he asks this he's already speaking, rhetorically, to a crowd; and it isn't a crowd of people, it's the words themselves, "I" and "crowd" and every other word in the radiant chain. How does one do things with words? By knowing (that and how) words have been doing things with one, by being the latest ways of old sentences. Then the most difficult thing is to use everything, so that Tradition and the Individual Talent can become what they are, synonyms. To describe tradition as a "crowd" rather than a crowd, as a set of recombinant practices rather than the roster of a Freudian drama is also to move away from two other policed concepts, that of the "New" and the "American."