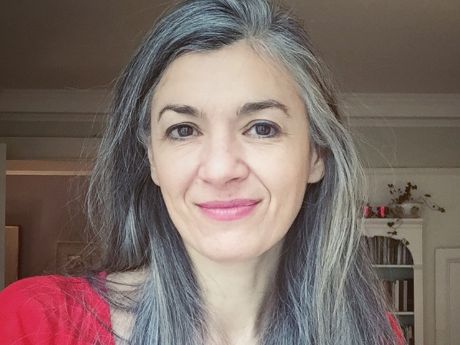 and sleep insists
inside a minor insect's cochlea:

In glistening jelly themes and hollower than Appalachian mines
among pines,

my praise, applause, my themes, my subtle worms combine.

such is my state, my stateless mind—
widowed turtle or green mother in some shady grove,

lost in her native tongue.

"I Do Not Sleep For Sleep Is Like The Wind And Trees Amazed" by Miranda Field. All rights reserved. Reprinted with the permission of the author.

"I shall be a heroine of the peripheral," says a Voice in Sylvia Plath's "Three Women." But then, like a more private aside, another wonders "How long can I be a wall around my green property?" Both voices are Plath's. Her current critical favor notwithstanding, Plath's a little bit of an outsider in American poetry. Time was you felt a little gauche admitting you loved Sylvia Plath. After all, teenage girls go ga-ga for her journals, even her poems. I never had Ariel pressed on me by a poetry teacher as I did Eliot's Collected or Berryman's Dream Songs. Male suicides and ex-pats get the central hallowed ground, the sisters rest nearer the hedges.

I read Plath to tatters long before I left England to live here, but I think her work's grown even more potent for me since that departure. There's a process of abstraction – more self-estrangement, than acclimatization – the trans-Atlantic transplant undergoes. I sense its undercurrents now most vividly in "Three Women: A Poem For Three Voices." Second Voice says: "Parts, bits, cogs, the shining multiples... I lose a dimension." Though she's describing another kind of loss, this might be the story of my first few years on these shores. But you don't literally have to cross the water to know the distancing and winnowing of all your subtleties that come with immigration. I was a teenage girl at the edge of an English secondary school's soccer pitch, the sole teenage girl studying the periodic table in that school's chemistry lab. Sometimes the homegrown feels just as other as the transplant — like a person in a ghost story who has "passed over" but doesn't know it: don't you see me? I think I'm speaking, but you can't seem to hear what I'm saying. (Looking this over a moment ago, I misread "transplant" as "transparent.") English-English and American-English, like many almost imperceptibly divided things, many misperceptions among us, are only as continuous as Alice's parlor and the far side of the Looking Glass. When you move from one to the other you stand there speechless, disoriented. "That's the effect of living backwards," says the White Queen to Alice. "And I, a shell, echoing on this white beach / Face the voices that overwhelm…" says First Voice. How do you give, and how receive, so many simultaneous translations of yourself?

In grad school, I was once cautioned not to write "as a woman" but "as a human." As if those two properties could be teased apart. As if I could be the wall around my own belonging. How minutely Plath explores her properties, the walls, the chinks between. Her Three Women speak through several strata of strangeness. They're immigrants – newly arrived and still in transit – in the borderlands of pregnancy and parturition. They're uncomfortably raw in their new space: "I am a wound walking out of hospital" says Third Voice. Sometimes it overcomes you like delirium, this foreignness. But then you wake up again, and there's that revealing distance, that strangely un-tethered, ex-patriot perspective – rich, if ambiguous, compensation for all you left behind.