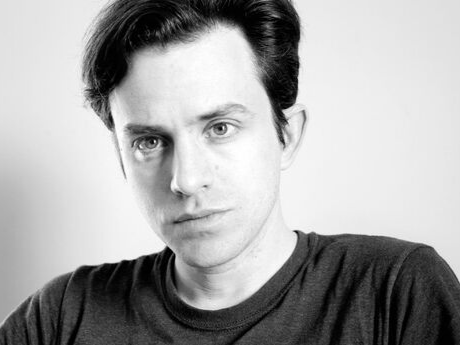 We take stock of the forearms:
They are like red snapper, slick
And sharp; they are like glass.
You see I am falling through

My pleasure like an intimacy
Of mirrors rubbing against
The face and you cannot uncut
The stomach: it is a die.

Here is the heat because we must begin.
Red rainbow spread like a hawk's gills;
Red rainbow tied off in its black holes
Which dot the ceiling because it is enough.

Lord find me,
Who is another? Where is the flesh
Of gain? Venture and thighs
Of gold and living glass?

I forget that I consented to wander
To wander by the pier; I consent
That I wander and am like paper:
A black kite wet with night.

Grid I am good and like the Aeon,
A child playing with colored balls.
In the hall because they know me,
The young ones, the eternally. They see

The stela in the flesh of my throat they divine
The throat-rod and its glyphs. Bright to burn
And nurse on cold marrow-like light:
It is midnight and I am speed cut

Into thirds of day; I am threes everlasting &
Hells of foment. Then I stand like eternal resistance
Like hell. No one who walks over this
Ground senses it is sound: look again:

We find ourselves on the shore
And the flame follows us it flows
Through our speaking it is here.
I have failed again, I am no longer I am failed.

I am first to run aground I am seen.
Let us style vital light: New moon again but I am light;
We are not otherwise we are seen.
How shall I stand how shall I be seen?

The morning curled around us like warm like
I am clasped by infinite waters, I am seen.


Poem reprinted with the permission of the author. All rights reserved.

Introduction to the work of Robert Fernandez
Robyn Schiff


Hyper-awake and hyper-precise, We Are Pharaoh, by Robert Fernandez is an extravagant work of visionary bearing, and as the heir of works such as Blake's Marriage of Heaven and Hell, Johnson's Ark, and Plath's Ariel, its keening rages and ravages and rises mysteriously. Experiencing these poems can be unnerving, and becoming implicated in the dynamo of power, history, death, afterlife, and dust that radiates from the Pharaohstate we join as we pass Go here is a strong undertow indeed; but Fernandez promises in the opening poem "Polyhedron," "Speed and seeing are the only prerequisites." You'll need the Ferrari on page 12 to keep pace, and the light of "The body, sentient candle,/ dripping sparks" on page 31 to ask "What illuminates the morning better than the souls of the dead," "to see / the energy we eat" and to witness the revelation later: "Lately, all the eggs hold a dot of blood and lately in films a sophisticated sorcery flows over the ceilings and I see it."

An egret, a heron, a flamingo, a toucan, and a vulture: this must be Florida. "The clear light of the overpasses / and the pale light of billboards/ veils us": This must be Miami. If the effulgence is more neon than you're used to, remember the climate is tropical and the Deco facade stylizes the rays of the sun against a backdrop of real sun. Think tomb of King Tut, think Futurism and ocean liner, and be careful. The atmosphere is glamorous and raw—a heavyweight title fight, but faster, swifter, more soulful: "The jai-alai sling of involuntary memory." And in regard to more hell-bent blood sport: "The cock will not be bled / without the ringing of the bets behind it." One does not simply read this book; one confronts it, undergoes it, and with luck and concentration and the right reading conditions, is transformed by it. My advice to you as you contend with this volume: "Find the wheel."

The path to what I'm trying to do with poetry lies somewhere between a Doberman's mouth and a Hockney swimming pool. I see Villon in a Nantucket-red jacket watching as the hills lean sweetly greener and darker and understand what it means to be frantic and to want to say I am here, I am real, I am not dead. Perhaps I'm dead already, and am like dry leaves tumbling across the desert to meet a man, naked, bestial, who holds his heart in his hands and eats of it. It is summer right now so bright wet fruits are scintillating seeing and where it's at, clouds of flies are where it's at. I want to be there with Stevens at Stephen Crane's wake or with Rosselli on Balzabar's carpet. I want to eat acid with Malory while we dig up toys from the surface of the moon. I am interested in, I am drawn to, I find myself taken by. I am concerned with, I am moving toward, I have an ongoing preoccupation with. When my friend says she wakes up covered in gold and asking for more, that is enough. My concerns exceed me so that I have nothing really to say other than that I am or seek to be the absolute desire for and submission to the work. There is also a dread that comes like a plate of seeds, like suddenly everyone is sweating, like the meaty universe falls across itself and presents us with its voids, its possibilities, its implacable accusations and demands. We might simply ask, like Dickinson, that the poem be alive, an animal that moves on ahead of us and has its own needs and destinies despite us. For my part, I want to see the poem set loose to the rangy elaboration of its own perversions and obsessions, permitted to be evil or move beyond good and evil, and to draw on joy or refusal or love.