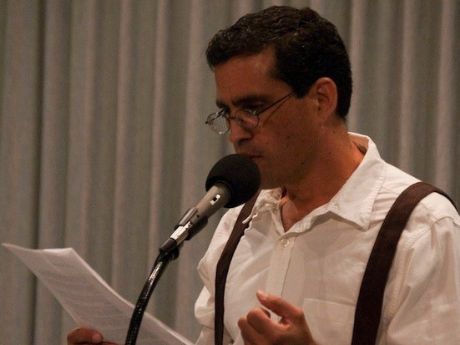 What's blue about blue? That's one way to talk about things, right? Kind of tautological sounding at first, but a frontal approach will yield some specific results to the quandary, what's blue about blue. And also, what's blue about red? Think about it ("what's blue about red")—I mean the actual colors—this is not a metaphor (review spectrographic phenomenon, exercise extrapolative logics). And then also, what's red about purple? Good! Good thinking. See how that's a way wholly different (scalar) way to approach things? And now, perhaps the most paradoxical and imperative thing to ask might be what's purple about red? Strange, huh? "What's purple about red?" I rarely think about it that way also. But what does it portend, to think like this? I think it says we'd like to go green today, hauling 1,000 buckets of black. Sprinkling pink speckles on your face so we know you're not all-extrusion-all-the-time—is peachy.

In what ways do I consider myself an American poet?

1. I would have to want to speak to (said) American people, for starters. That checks.

2. I would have to figure out (by way of a cultural material definitional terrain traversed by a sly subjective probabilistic calculus) what "American" might be pointing to? That checks.

3. A significant number of people from different cultures, nations, social stations, would have to implicate me as "an American" poet? That too checks.

4. I would have to identify with the Big Haggles of where American Poetry Now™, while voluntarily (sadomasochistically) withstanding the 1, 001 pettifogging daily intrigues to "formulate" that question. Check.

5. A significant paper & cyber (and even live DNA) trail would have to be there for someone to "examine", a kind of smear that says, "here lived an American Poet", or is it "here lives"? Check.

What kind of question is this? "yes, there is an "American Poetry", it's about the time-honored initial struggle and subsequent union between..." You know. Man. Right now, national "cultural matters" are in such a state of agitation [recessions create new social organisms outright] that's it's really hard to point out deep historical lines of cultural ascent, or descent, as it would be. But hell, being a new spongy recessional critter with six eyes, I'll take a shot at it, play into the American Poetry Society's Neo-Hegelian Prompt No. 2. Yes! There is an "American Poetry". In the stream-of-things it's about a "time-honored" struggle and subsequent dysmorphophobic union between..." individual & nation (image-in-nation). The tectonic economic-cultural shifts are so massive, and there's so little sense and push for "future." I.e., Where are Tea Party poets? There are none! Or rather, we are them. As anti-Tea Party forces, we take care of the dysmorphophobic national disunities—all at once. "Experimental." Doctoresque.

Yes, all the marbled pillars have little bits of key lime peel in them. Concentrate. Taste it.

You know...we know when we know when a particular poetry is duds-ville for us. "can't combine" "can't mix" – is bad enough; "has no desire to" – is like, stick to spreadsheets.

I'm a stickler for wide-angle views. I think that young poets ought to digest every major tradition and sub-tradition of "American" Poetry – none excepted. In addition to this gargantuan (impossible) prescription, I think young poets should learn as many languages as possible and read poetries in those different languages. This is a marathon of a task, arduous, grueling, surreal in the midst of it, and maybe very rewarding in the end, maybe. Every poet is a kind of transmitter (party crasher alien) of a complex of multiple social locations. Aesthetics is like promissory note that's worth at least one "it's bound to happen." It usually "doesn't." Lol. But it's necessary, and significant.

Also, I'm reluctant here to list off the big game-changers in terms of "American Poetry." There are many for sure! I don't really think of National Poetics as an amoebic movement of the millions. And yet, I suppose I'm here openly refusing the role of taxomonic descriptionist (re: cultural governance). I like to keep my haunting ghosts as haunting ghosts. Statues are statues.

There will be a deep, and largely misunderstood cultural struggle between Trans-Migratory imaginations and Nativistic imaginations. At rare times, the "progressive" perspective will make use of the Nativist dimension, at times the "regressive" perspective might make use of the Trans-Migratory dimension, but by and large it will be the opposite of that. Poetry will be given the "honor" of figuring out specific "technological" tweaks to that epical struggle. Poets will embrace this gift from the Hegemon (bureaucratic) relegation as much as the "on the page" (of the page) movement did in the past. Poetic Activity of a different sort will get wise to this Bad Deal, and perhaps (perhaps!) assert a new kind of Intra-Fluctuative Para-Response to that situation. Old saws like "sincerity", "irony", "snark", will sound even more quaint than they do now. New forms of body-movement (commitment) will be coupled to semantic utterance. Words will become really loud again. Right now, despite how loud the media surround is, words are muffled, almost beyond audibility.