by Graham Foust and Samuel Frederick 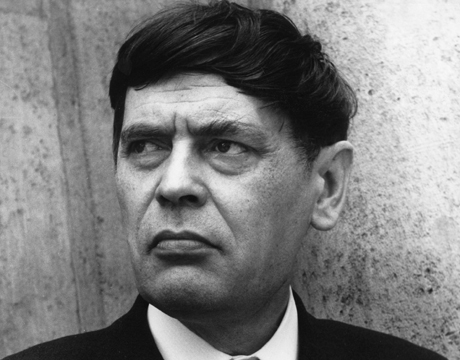 A version of this essay will serve as the introduction to In Time's Rift (Im Zeitspalt), which will be released by Wave Books in September.

Ernst Meister had already begun writing poetry, prose, and dramatic works when, having just turned nineteen, he enrolled as a theology student at the University of Marburg in the winter semester of 1930. He soon traded his theological pursuits for philosophy, literature, and art history, attending lectures by Karl Löwith and Hans-Georg Gadamer, two of Martin Heidegger's former students, both of whom, along with their teacher, had a tremendous impact on Meister's work. Later he began working under Löwith on a dissertation on Nietzsche, a project he eventually abandoned because of Löwith's forced exile, though by that time he had already published his first collection of verse, Ausstellung (Exhibition), which appeared in 1932.

When Adolf Hitler became chancellor early the next year, Germany's literary landscape changed drastically, and Meister's work (compared in an early review to the painting of Wassily Kandinsky) was considered too abstract for the new, neoclassical aesthetics of the Third Reich, which branded any hint of experimentation as "degenerate." Though Meister composed poetry after 1933, he gave up trying to publish it. This renunciation lasted two full decades—only three short prose pieces would appear in the feuilletons of the Frankfurter Zeitung in 1935. During the Second World War, he suffered a series of protracted illnesses and was called to military service twice. He first served at a railroad artillery in Rügenwalde (in present-day Poland), where he was injured and deemed unfit for combat; during his second tour of duty, he was deployed to Stalingrad, though he and his division never made it there. After another period of illness and additional military service in France, Meister ended up in Italy, where he was captured by the Americans and held as a prisoner of war. Upon his release, he returned to Hagen (in what was to become West Germany), where, in relative isolation, he worked in his father's railroad clamp factory and continued to write.

Eight years after the war, Meister published his second book of poems (1953's Unterm schwarzen Schafspelz [Under Black Sheep's Clothing]), and after eight more years he would dedicate himself exclusively to his writing. By the 1960s, he had published over a half dozen volumes of verse, though he failed to attract the same recognition as contemporaries such as Karl Krolow, Günter Eich, or Paul Celan. Meister was, in fact, an outsider—and not by choice. He was never asked to join the Gruppe 47, a collective of over 200 writers who represented—and effectively determined—the literary establishment in the postwar years. But neither was his work embraced once that group's influence had waned, after the student revolutions of 1968. In this period of political agitation, Meister's verse was largely perceived as apolitical and nihilistic, and therefore unsuited to the prevailing literary climate.

Like the American poet George Oppen (1908–1984)—who also fought in the Second World War (though on a different side and under very different circumstances) and who stopped publishing poetry for a prolonged period before, during, and after it—Meister takes much stock in "the little words," words that often prove crucial to his efforts to, as Oppen says, "lay down the substantive for its own sake." The following couplet from one of the poems from this book seems emblematic of Meister's style, and it's fair to say that these lines wouldn't be out of place in one of Oppen's poems:


I look at a window,
square of sky.


How many poems in which the speaker looks out a window have been written? How many in which the speaker looks at one? If the average speaker-near-a-window poem tries to satisfy and/or surprise us with what's beyond the window, Meister's poem catches us off guard by its speaker's stopping just short of making use of that aperture and then renaming it. Here, we're not so taken with what the speaker sees; rather, we're drawn to how he sees—and how unusual it is to see someone see (and say) in such a way.


Recognition finally came for Meister, though almost too late. He died just two days after receiving word that his life's work would be honored with a Georg Büchner Prize, the most prestigious literary award in Germany, which was then granted him posthumously, a fitting tribute for a poet so preoccupied with mortality. To be sure, death is often Meister's subject, and yet a slight ontological shift permits us to see him as a poet of life, a writer who chronicles what it means to live with the fact that he (and you) will at some point cease to be. That Meister is frequently compared to Celan is, in this respect, perhaps inevitable, even more so given their shared predilection for terse, "hermetic" verse that seems to approach the limits of the language. Meister's poems, however, do not exhibit Celan's deep ambivalence toward—indeed, distrust of— language itself; he thus rarely resorts to the kinds of contorted neologisms that characterize Celan's verse, especially that of his late period. Furthermore, Meister is not particularly interested in historical time. His poems rarely refer to actual occurrences or places, but instead explore the abstract, metaphysical spaces opened up by eternity, the awareness of which Meister figures as something terrifying.

This horror in the face of the infinite is one of the main themes of Im Zeitspalt (In Time's Rift), Meister's penultimate collection, and the midpoint of an informal trilogy constituting his "late work." (The full volume was published in 1976, though all but three of the poems in the book's first half appeared in bibliophile editions in 1969 and 1973.) The book's title alludes to Pascal's Pensées, in which the mathematician and philosopher considers the short span of his life "swallowed up in the eternity before and after." Rather than facing eternity as something edifying, Pascal is frightened by being "engulfed in the infinite immensity of spaces." Meister seizes on this notion as an expression of our existential condition. In his posthumous papers he identifies our brief life as "time's rift," which he then defines as "conscious time between two eternities." Elsewhere Meister expands on this idea, with direct reference to Pascal: "Between an 'eternity before' and an 'eternity after' . . . we have our life's term. In a rift of time the corner of the universe appears to consciousness. —An unfathomability without compare." Consciousness of the infinite cosmos forces us to attend to consciousness of our own frightening world, and, in turn, to confront our mortality. The infinite is the correlate of the nothingness that is our fate. But this nothingness—which, according to Heidegger, "itself nothings" ("Das Nichts selbst nichtet")—is not just a void in which we lose ourselves. Nothingness, and the death that leads to it, grants the world meaning, and also makes poetry possible. In a gloss on one of this book's poems, "He, the monosyllabic one," Meister makes this sentiment explicit: "Death is the extinction of existence through which I first come to understand world at all. It even brings forth poetry (the line of verse) . . ."

Like much of Meister's late verse, In Time's Rift is shot through with traces of his predecessors—the cadences of Rilke, the stark, metaphysical landscapes of Trakl, and the tortured syntax of Hölderlin can be found throughout. Meister's penchant for grand abstractions and philosophical concepts, often taken directly from thinkers such as Hegel, Schopenhauer, Nietzsche, and of course Heidegger, forces his readers to attend to the modulations of thought over image. This persistently pulls his language into the realm of thinking, an activity made extraordinarily intense by the taut, afflicted space opened up by the poem, a space analogous to life. Consider this short poem from near the end of the book:


You see yourself
as a stranger
often,
for before long
you'll drip
with rot,
appear to rest.


What makes the poem work—what makes one want to say it again and again—is that its use of the word "for" (denn in the German) to yoke a familiar fiction to a future certainty allows the reader to feel his or her brief time on ancient Earth in a new way. On the one hand, the word "for" could indicate that the poem's "you" sees himself as a stranger by way of his regularly picturing himself as a corpse, a thing he isn't (yet). On the other hand, "for" also suggests that the you's seeing himself as a stranger—whatever particular visions that might entail—is something he does now precisely because he'll be unable to do so when dead. In either case, the eventual fact of death stimulates the you's imagination, and the poem as a whole enables its readers' imaginations to oscillate between—and pull together—these two possibilities, the first of which feels grisly but familiar, the second of which feels empowering but odd. Given that the you only appears to rest in his state of busy decomposition—and so continues to participate posthumously in the act of artifice—it's also possible to read the poem as a kind of prescient and backhanded ars poetica.

American readers new to Meister will find that In Time's Rift shares many concerns with those of a large handful of twentieth-century American poets, particularly Wallace Stevens (see his "Less and Less Human, O Savage Spirit" and "Flyer's Fall"), Laura Riding (see many of her "Poems of Immediate Occasion"), William Bronk (see his "How It Diminishes Us" and "Real Thinking"), and Robert Creeley (see his "The Window" and "The Farm"), though it may be that the experience of reading Meister for the first time is most akin to one's initial encounters with Emily Dickinson, whose poems, like Meister's, at once entice and irritate the mouth and mind. (Indeed, we have attempted to retain as many irritants as possible in our translations—including Meister's often unnatural syntax—which we feel are a large part of what makes this work attractive.) Consider the opening of Dickinson's poem 1462, the mixed tenses of which resemble those of "Did you, sun, thieve," this volume's final verse:


Later in Dickinson's poem—which ultimately makes the claim that both God and life are felt as intrusions (as opposed, we suppose, to inclusions)—she refers to our ignorance as a piece of armor ("our cuirass") and asserts that we wear our mortality "as an Option Gown" until asked to remove it. Like Dickinson's, Meister's sizable body of work is the record of a humble and valiant attempt to put a chink (ein Spalt) in our not-knowing, however resistant or protective that not-knowing may be.